African-American, Haitian, and Latino Floridians Launch New State PAC To Add to Gillum’s Surge to Elect Him as the First Black Governor of Florida.

With one month left before the Democratic primary, the newly formed New Florida Vision PAC is adding to the momentum building for Gillum, with an independent campaign knocking on doors, reaching voters by phone and text and taking to the airwaves to make sure Florida’s African-American, Haitian, and Latino voters know that there’s a candidate from the community and for the community on the ballot on August 28th.

“People of color make up the majority of Democratic voters in Florida. We have the numbers. We have the power. And now we finally have a candidate that is motivating people to turn out,” explains Andrea Cristina Mercado, director of the New Florida Vision PAC. “Andrew Gillum has a track record of opening doors for Florida’s communities. We deserve a seat at the table and with Gillum in office, we’ll have it.”

Dwight Bullard, chairperson for the New Florida Vision PAC adds, “Black and Latino voters don’t want to miss the chance to be part of making history. We have the opportunity to not just elect Florida’s first Black governor, but a governor who is unapologetically progressive and who will put our communities first.”

With Florida’s governor’s elections frequently within 1% point, many believe the winner will be determined by who can expand the electorate and motivate new and infrequent voters who sometimes sit out to come to the polls. That’s exactly who the PAC will be reaching out to in its efforts over the next month.

The organization will be centering its conversations with voters on Gillum’s working class roots, investment in public education and affordable housing, strong stance against the gun lobby, commitment to criminal justice reform and unwavering defense of Florida’s immigrant communities from Trump’s deportation force.

Voters who need to find where to cast their ballot or who want to get involved in getting Gillum elected can text Andrew to 90975.

Donations to the effort can be made at newfloridavision.org 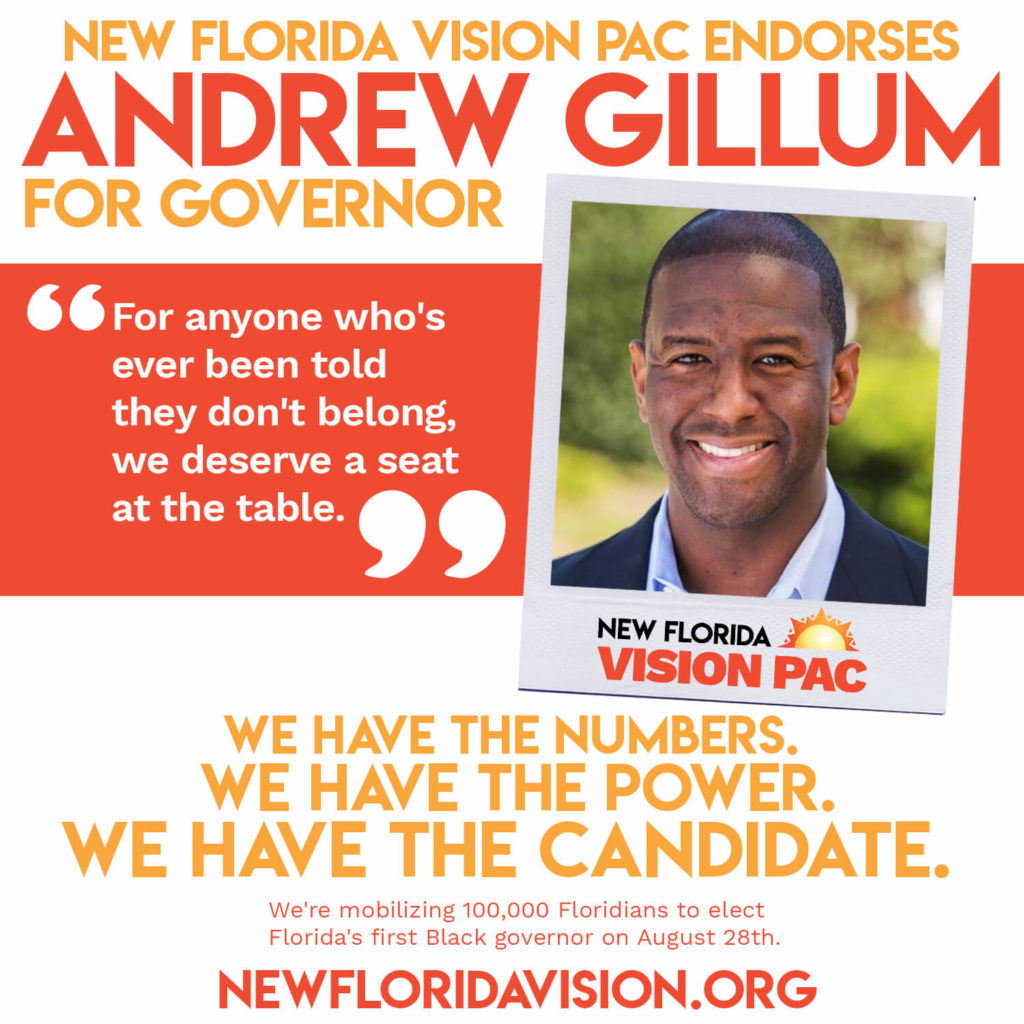